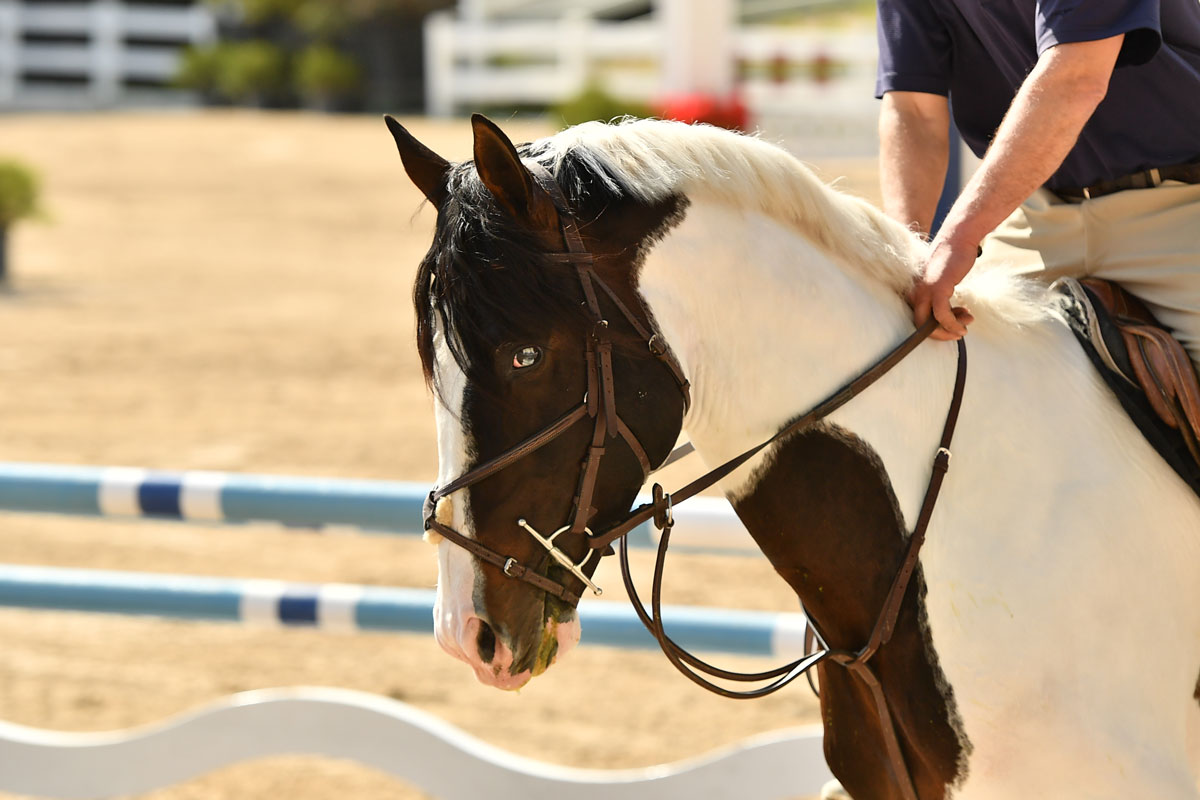 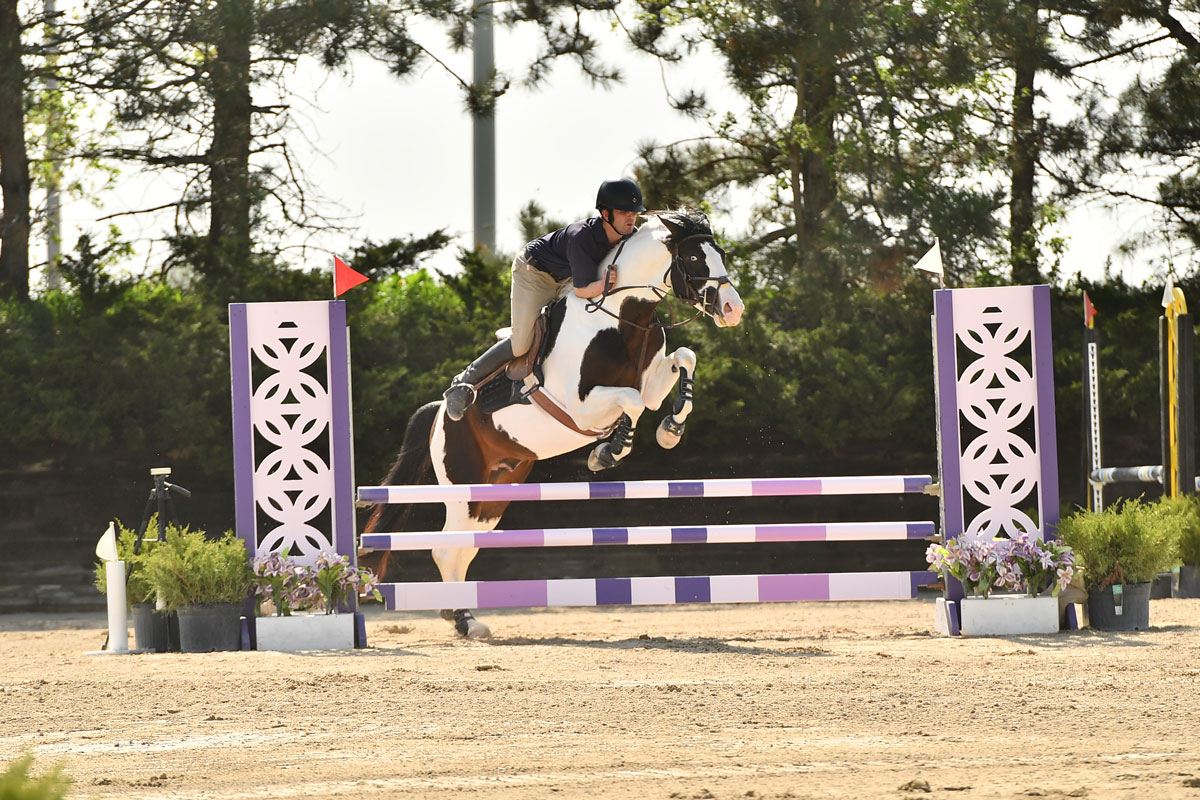 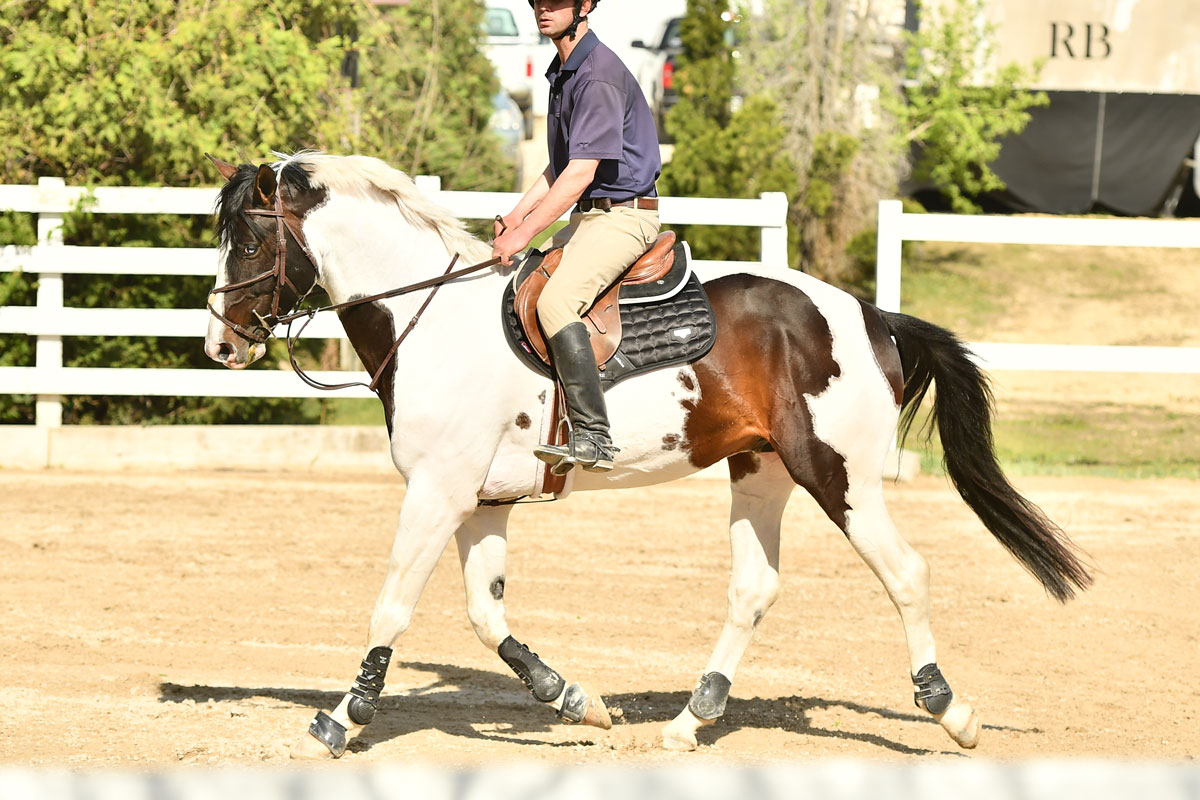 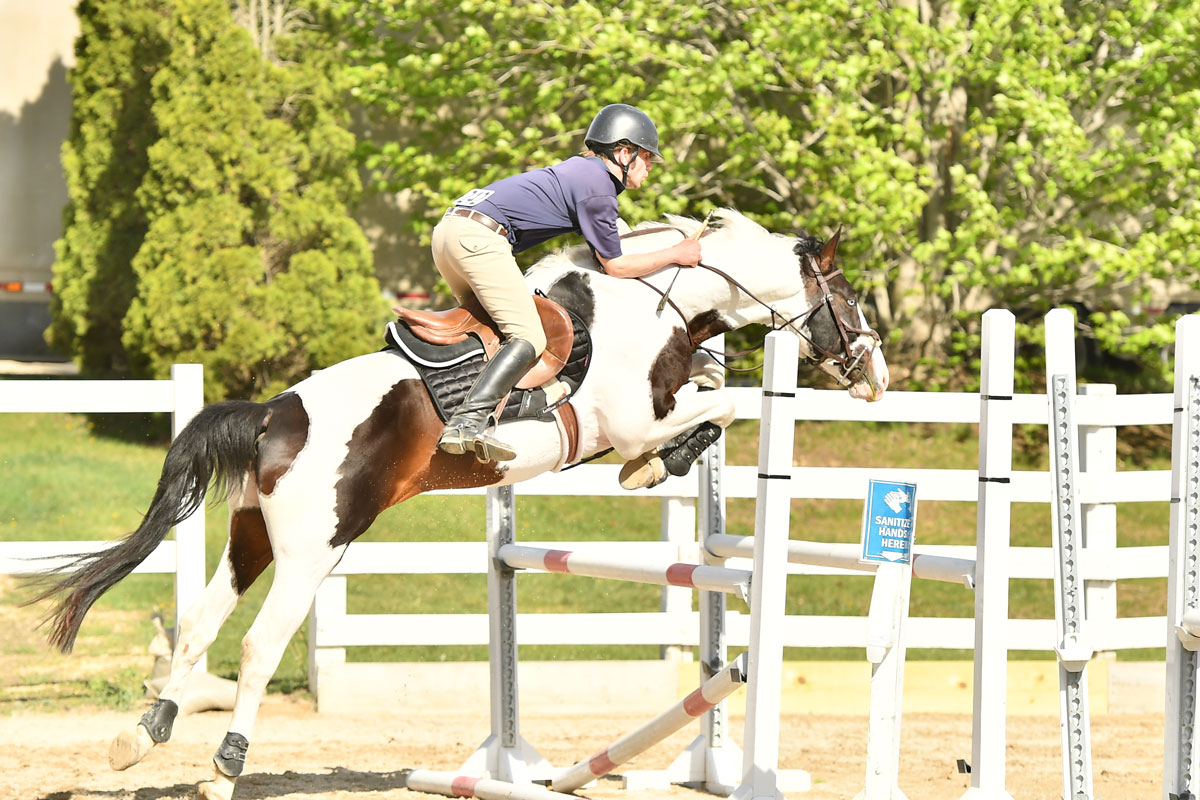 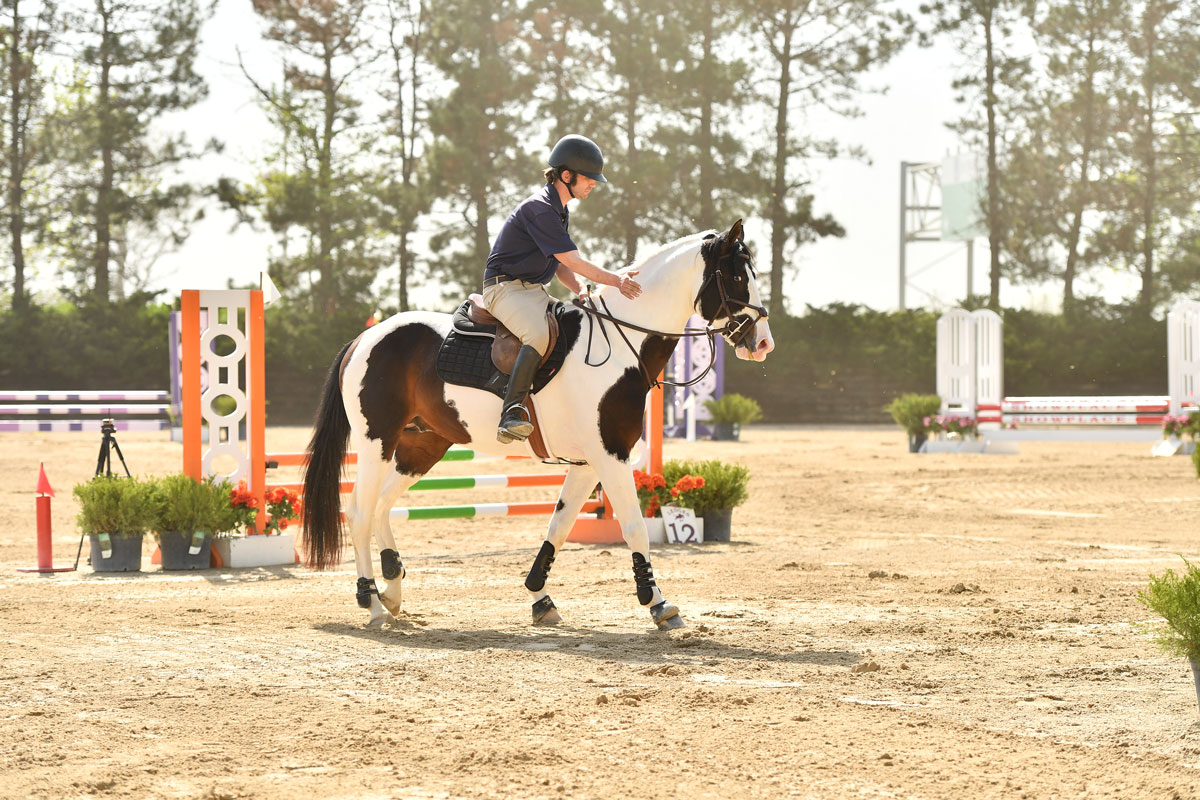 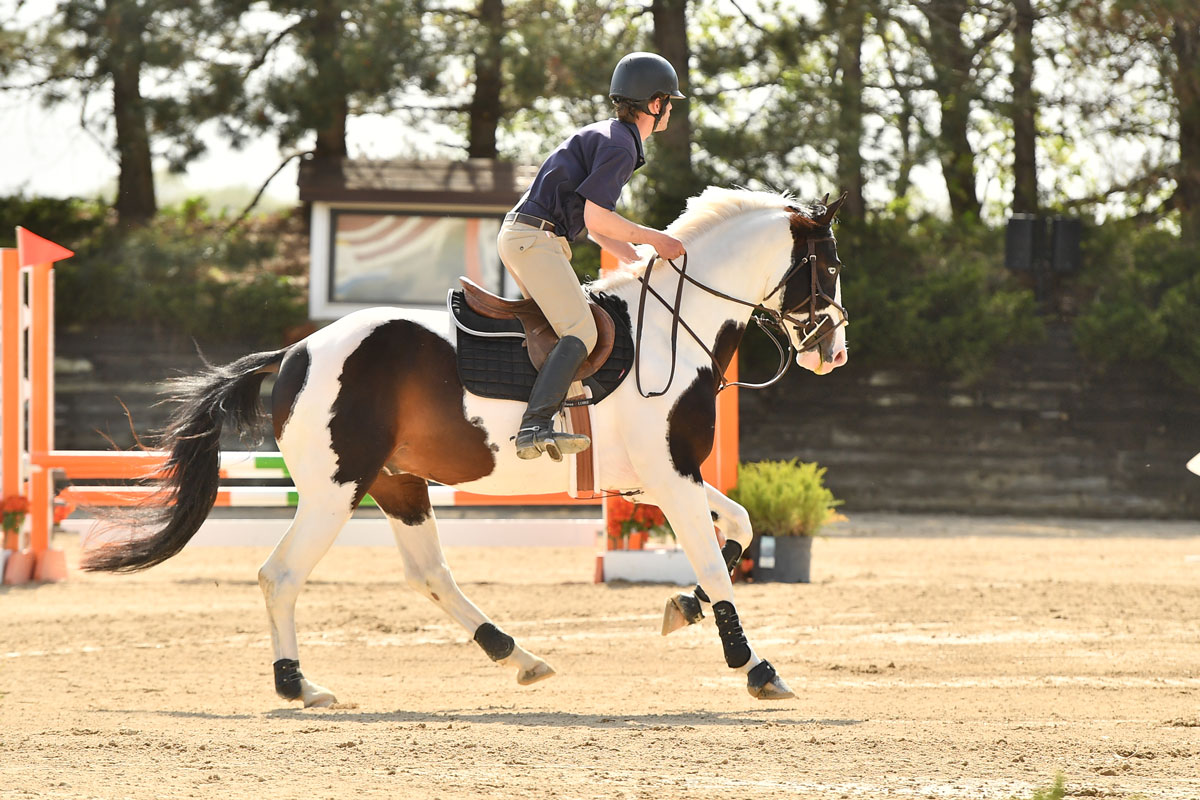 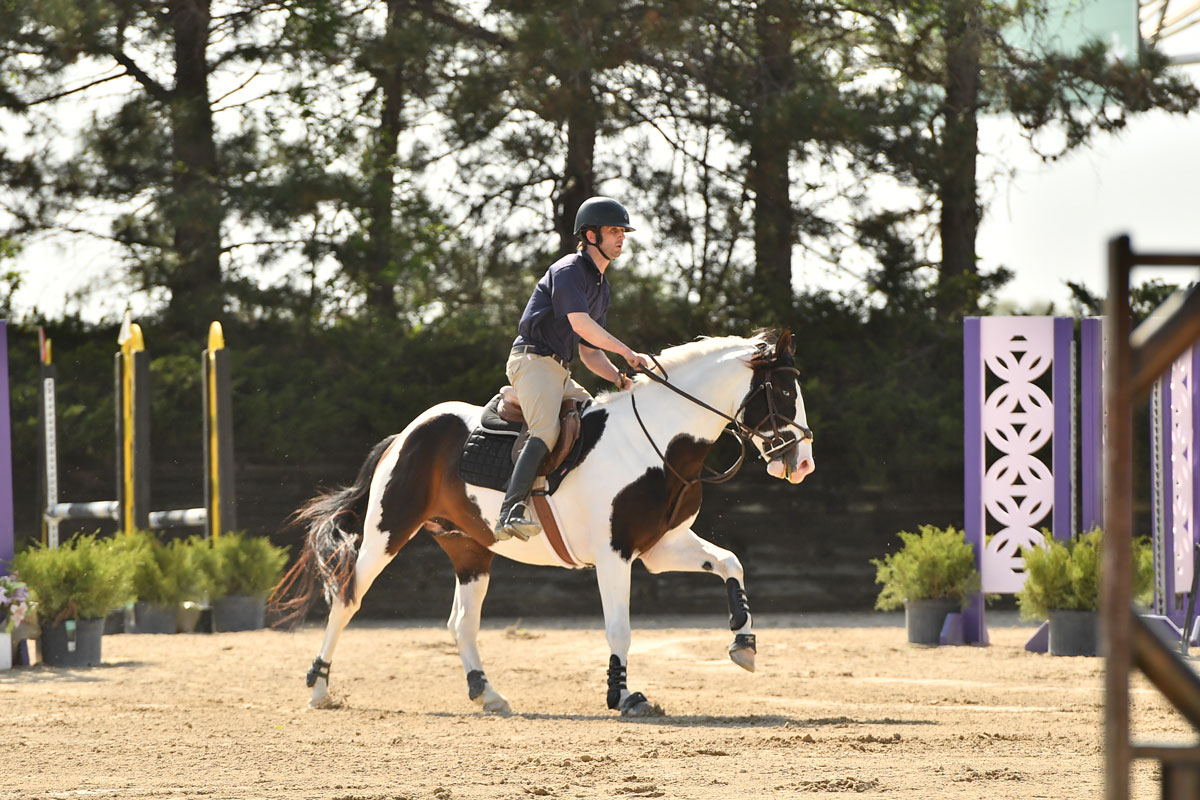 Born in 2015. Mystic Art is homozygous for tobiano and WFFS negative.

Mystic Art is an outstanding tobiano Trakehner stallion, DNA tested HOMOZYGOUS for the tobiano gene and WFFS negative. His breeding is impeccable.

While expanding his military state, the so called soldier king Frederic William I of Prussia ( 1688-1740) was permanently in need of horses for his light cavalry. In order to be independent from buying these outside of Prussia, the economic king founded the Main Stud of Trakehnen in East Prussia in 1732, also the beginning date of the outstanding Trakehner breed.

To receive a light fast and efficient cavalry horse, the existing population of mostly heavy horses was consequently bred to Oriental and English Thoroughbred stallions.  Following his father on the throne, Frederic the Great ( 1712- 1786) began to supply Trakehnen’s breeding population with light horses from Eastern European countries. Among these were also some colored horses which at that time were rather popular. Frederic the Great obviously had a weakness for spotted horses. A painting shows him riding a leopard and it is known, that he sent his general and friend “von Seydlitz” another beautiful leopard as a present.

Due to the growing demand especially for colored horses, Trakehnen forced the breeding with a colored stallion named SPINOLA, born in Trakehnen and used there from 1764- 1780.  Besides numerous colored offspring, mostly sold to aristocrats and princely courts all over Europe, bringing Trakehnen a lot of money, Spinola was considered to be one of the fathers of the original Trakehner race. His blood can still be certified in most of the pedigrees of the Trakehners of our time.

Another colored stallion was HUA EMBARC, born 1783. He had been imported from Spain. HUA was a Spaniard “of the old race” and one of the most effective stallions for the breed between 1768 and 1808.

Unfortunately, these historic books got lost in the World War II disaster. At any time these breeders were able to supply the Prussian army, which was occasionally in need of colored horses for parades or cavalry regiments with Trumpeter Husars.

Due to a new trend for colored horses by the end of the 19th century, Trakehnen once again started color breeding and bought a piebald mare in Russia named EVA. It is not known why the officials didn’t decide for an East Prussian colored from private studs, already well linked to best Trakehner bloodlines.

EVA by Yalantush Khan (dark bay, born 1881 in Streletz/Russia, by Jassy, an Orlow Rostopshin and Nawaga, an Arab/Rostopshin) and Kukshen (a small darkbay pinto mare from Kurland with just 131cm. About her descendance nothing is known) was born 1895 in Russia, measured only 149 cm and was brought to Trakehnen in 1899. She was rather fertile and had fifteen living foals from 1900 to 1918, among these were eight coloreds. Four of them became broodmares in Trakehnen and one stallion – Eva’s Sohn – was approved.

Before the end of World War II Trakehnen and the traditional private breeders were looking proudly on countless coloreds all over the country, a great number of them Eva offspring.

Her first pinto foal was a skewbald colt called “Erzschelm” by the bay Trakehner stallion GRENADIER. He was used as  farm horse and most probably did not have offspring.

Eva’s second pintofoal was born 1902 and was named EVCHEN (small Eva). She was piebald and by the TB stallion VOLAPUEK XX, from Graditz. EVCHEN stayed broodmare in Trakehnen and brought the stallion ERSTKLASSIG by the TB GREIFF XX. ERSTKLASSIG was used in the stud of Rastenburg until 1909, from 1910 – 1923 as “test stallion” in Graditz, in 1924 again as stallion in Braunsberg und finaly was sold to the private stud of von Kobylinski in Korbsdorf. He measured 159cm.

The fourth pinto foal, born 1904 was the stallion EVA’S SOHN (Evas Son) by the Trakehner stallion EDELING. Measuring 155 cm, he is described as a strong and noble stallion with excellent gaits. Evas Sohn was used in Trakehnen’s GUDWALLEN from 1908 until 1920 and was then sold. Besides a lot of important and well known Trakehner Pintos, the stallion also brought the mare BRANDUNG (see APART – MANDALA below)

Eva’s sixth pinto foal was a filly, the piebald EFFI (by the TB GREIFF XX. Her son EFFEKT was one of the most important pinto stallions of that time and besides his years in Braunsberg and Rastenburg (famous East Prussian studs) he was also prefered in some of the most famous private studs of East Prussia. (v. Kobylinsky, Dohna-Schlobitten, v. Glasow, etc)

Another famous piebald colt by EVA (# seven) was born 1907 by the Anglo-Arab stallion SYLVIO. He was given the name of “EXZELLENZ GOLTZ” (Excellency Goltz). Von Goltz was another famous Trakehner Pinto breeder. Here in 1937 the piebald stallion HAUSMEIER, 160 cm,was born who was given to the stud of Rastenburg in 1940.

Eva’s foal # 13 was named EPATA (by the TB Bill of the Play xx). Offspring is not known.

The last Eva foal was EDELTRAUT by the Turkestan Tekke DJEIRAN. She became broodmare in Trakehnen.

After this foal EVA was killed at the age of 20 years.

As a result of the war, the whole country had to be evacuated and Trakehnen was completely destroyed by communist Russia. Although it had been the largest warmblood breeding place in the world, only 800 horses reached West Germany, among these a handful coloreds belonging to the family of Schulze-Puspern, brought to the West on a 2000 km trek. However, none of them were Eva offspring.

As there was no interest in colored horses in West Germany, the color got lost within 3 generations. The last colored Trakehner was the piebald gelding “SCHILL II” (Tartar/ Karosse). He measured 175 cm and was one of Europe’s most outstanding jumpers in the sixties. With his owner, the well-known Belgian champion Edgar Henry Cuepper, SCHILL had numerous successes all over Europe in the highest jumping classes. Cuepper finally became Belgian Senior Master in 1970.

Although most of the East Prussian horse population had to be left, only two coloreds were registered in the Polish Studbooks: CORNELIA, by Cornelius / Flora and APART, by (Akrobat /  – Brandung – Braunsberg Eva’s Sohn – EVA) Cornelia’s color descent is of an old private color breeding stud (von Kobilinsky), not related to Eva. She brought two graded colored stallions, DON CORNELIUS and CORNELIUS.

While Don Cornelius had little influence in former Polish color breeding of Trakehner origin, Cornelius delivered 7 colored mares of which RETINA, with 4 daughters was most successful. Two of them, RECESJA and RETORTA brought four graded colored stallions, all of them pure bred Trakehners, REWIR, REWANZ, RECITAL (by Recesja) and RESOR (by Retorta). Most of the Polish colored horses that can be considered Trakehner, have one of these stallions in their pedigree. In particular Rewir (with his best son NIL) has dominated Polands colorbreeding for a long time and his offspring in the meantime can be found all over Europe, like the well-known pure bred colored Trakehner MAKAR who’s offspring till now got approval by the Trakehner Verband, five of his daughters already received registration.

Even though the Polish Studbooks mention the Colored Trakehner APART, no breeding records of the stallion were known, which led for a longtime to the conclusion, that EVA descendants had not survived the war.

When in 1985 the author got information that Polish studfarms had continued the Trakehner color tradition, they managed to cross the “Iron Curtain” into communist Poland and after a one week’s search through Polish provinces, they finally found in the shabby stables of a farmer two three years old mares and, after observing their pedigrees, to their great joy it became evident, that one of the mares had APART as great – grandfather. Further investigations made clear, that Apart had left only two-colored mares of which offspring MANDALA was the only chance to preserve the EVA line according to Trakehner pure-breeding regulations. Owning this jewel, Gestuet Deschenhof had great luck to receive three piebald fillies by Makar. But as misfortune and fortune stand very close together, it was painful, when this wonderful breeding mare, as perfect a coach horse and riding horse, died in 1997. So much greater the joy, as one of her daughters foaled a colored piebald filly in 1998. The gap MANDALA left is large, but it seems, that her daughters MANITOBA and MAKARENA as well as her son MANCO have not only inherited their mother’s beauty, they also show all requirements for talented eventing horses. Meanwhile the Mandala daughter Manjana is sold to USA and registered by ATA. Her piebald filly MALINDI by HERALDIK TB in the meantime got approved as well as Manitoba, thus definitely saving the EVA-Bloodline for the Trakehner bred.